History of the Beignet 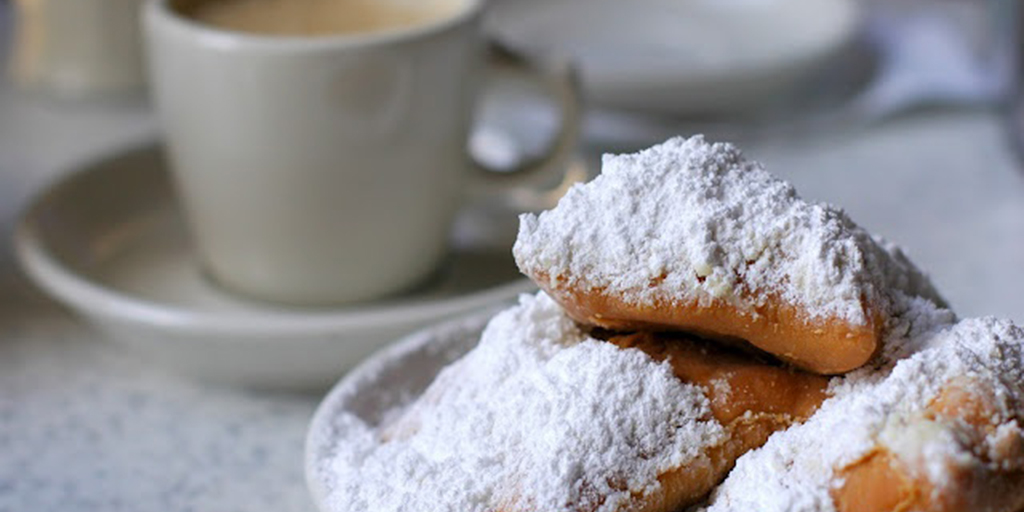 Light, fluffy, delightful things come in small square packages according to the history of the beignet. If you’re not familiar with these guys then think donuts without the hole, sprinkled with powdered sugar.  Beignets are traditionally served fresh and hot, which also makes them a common breakfast dish in parts of the America South.

Unlike traditional donuts, beignets are made with choux pastry. Now, if you didn’t grow up in a home that smelled of fresh baking than perhaps the term choux pastry is foreign to you. Choux pastry is dough made up of water, butter, flour and eggs. What makes it choux pastry is that there is no agent like yeast helping it to rise. Rather the raise occurs thanks to  moisture from steam.

Typically choux pastry is used to make baked goodies but beignets on the other hand are fried. Additionally, some places have taken up the habit of making beignets with yeast dough, which changes the texture of the beignets, but rest assured the deliciousness remains.

Although the traditional beignet is simple sugary dough, fried and powdered, these days you can find yourself an altogether different beignet animal. Beignets can be stuffed with a fruit filling or piped with chocolate or cream, regardless of their filling, the powdered sugar remains.

As with all things great, everyone wants to claim ownership or at least claim some sort of connection to the ownership. The history of the beignet therefore has a whole lot of volunteers claiming ancestry. Although popular theory indicates that the beignet is a French invention alone, the reality is that these sweet little treats may have been introduced to Europe courtesy of the Moors.

The Moors, or medieval Muslims, invaded the Iberian Peninsula in the 7th century and took power in Spain and neighboring countries. The Muslim courts have a rich food history and many of these foods made their way into Spanish cooking.

There are a variety of reasons to believe that is the Caliphate that brought these sweet treats into the heart of Europe, one of them being the fact that creating a beignet is an expensive undertaking.

Beignets are fried which means the heavy use of fats, something only the rich could afford.

The word beignet however has a French connection and the fritter itself is tied to 16th century France and Mardi Gras festivities. The real intrigue appears with the inference that the beignet may have been transported to the land of the Eiffel Tower via Spain. In fact the French term for little fried dough balls in the Middle Ages was Spanish beignets.

Additionally a version of the beignet exists in Muslim, Christian and Jewish histories as a morsel to feast on while breaking the fast. Although modern religious traditions have created deep divides in religion, 7th century Andalusia had members of all three religions living side by side.

Fast forward to 18th century America and the story of the beignet changes drastically. There are several theories about how exactly the beignet came to be in the United States of America. One of the theories credits the arrival of the famous beignet to Ursuline nuns in the 18th century.

Another equally popular story is the arrival of the beignet care of the Acadians from Nova Scotia. The Acadians are the descendants of French settlers in Acadia which in present-day covers a large swath of Eastern Canada, specifically the Maritimes. The Acadians were deported from Canada during British rule in the 18th century with large numbers of them resettling in Louisiana or returning to France.

Regardless of who actually introduced the recipe, there is agreement that it did come from French settlers. Although today the beignet is often found in fancy cafes, its American origins stem from housewives in tiny little kitchens in the South.

Women would knead the dough for the day’s bread and take from that dough ball a smaller portion to fry up for the morning’s breakfast. These fried pieces of dough, often sweetened with honey, would be sent with the men out into the fields and so the odern breakfast beignet in shi-shi coffee shop has very humble beginnings.

Today the beignet is not humble grub, but rather something that deserves a pedestal as a café feature. The famed Café du Monde in New Orleans is famous for its beignets which it serves up alongside chicory-laced coffee. The beignet and chicory coffee combo has historical roots itself. Coffee was scarce in the 18th and 19th centuries and as a result, drinkers added chicory to create a more robust flavor.

The history of the modern beignet may be murky but what is clear is that a hot, soft, plump, doughy piece of powdered sugary goodness is much beloved.